Rantoul may be on again for 2021 in the Fall. Watch here or in the Newsletter for further announcements.

We did reach our goal of ten sponsors, so this proposal will be moving forward. Dates for the flying sessions will be posted here when they are set, hopefully in early January.

Chanute’s past is historically significant – it was used to train the first class of pilots that would end up based out of Alabama, the Tuskegee Airmen.

After the base was shuttered, the site was handed over to the Village of Rantoul. The three main hangars have been used for various activities, but the one most suitable for indoor flying stands empty. This is the same hangar which was used by the Chicago Aeronuts for two contests in 1984-85. There were many records set here and I believe one still stands today.

At one time, this hangar was utilized as a warehouse and even an indoor sports practice facility.

The height of the hangar is just under 45’, making it a fairly high Category 2 site. The ceiling is flat and the floor space is 200 x 240’. This is a large space. 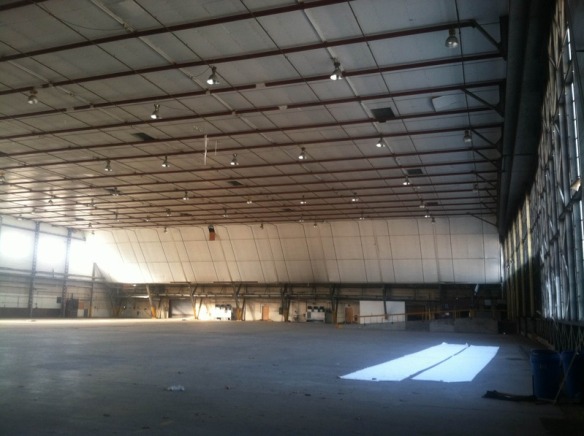 The hangar is not heated, so it could be used only during the warmer season, specifically from May through September. There is electricity in the hangar and is well-lit. One possibly important consideration – there is no running water in the hangar. The airport would supply us with a porta-potty or two near the exit. (Note the airport has gotten out of the portapotty business, working on quotes now.)

This site is not perfect and truthfully, will require some work to make it a good flying site. The biggest one is the fact that, after ten years of disuse, it is dirty and could use a good cleaning.

The hangar isn’t really tight – meaning when it is windy outside, there is drift. On the other hand an F1D flight made on a hot and near windless day landed right where I launched it. With a bit of work, the building could be made tighter. I’m not sure we can eliminate the drift on windy days, but I am certain we could lessen it and probably even significantly.

One positive about the site is the fact that it is fairly well insulated. On an unseasonably cold October day, while it was 36 degrees outside, the interior temperature was 59 degrees at 7am. During the summer day I mentioned, it was a good 10 degrees cooler inside than outside.

With the successful contest we held in October, it dawned on me that this hangar be a viable location to host an ongoing site for future indoor contests. The folks at the Village were a pleasure to deal with and more important, made it very apparent that they welcomed our interest in using the hangar.

With that in mind, I submitted a pre-proposal to the Village of Rantoul that outlined our plans. We would rent the hangar for one weekend each month, from May-September. They agreed to lower the rental fees from $300 to $200/day. Thus, the costs to rent the hangar would be ten days @ $200 for a “total” of $2000.

Keep in mind, though, that this is not the TOTAL COST. At a minimum, other costs would include cleaning the space; materials for sealing the space; and insurance. There may be other costs I haven’t considered.

Nonetheless, it doesn’t make sense to pursue this much further if we cannot get enough support from the indoor community to make this a sustainable activity.

Everyone who flies will need to be an AMA member in order for us to procure the insurance. The village requires us to sign waivers and submit a sign in sheet for each weekend. I didn’t want to form a new FF club so I asked the Bong Eagles if they would be willing to handle the money. They agreed with one caveat – that sponsors also become club members @$20/year. This seems a reasonable request and there is precedent with Lakehurst and the ECIM.

My initial idea on financing this proposal is to model the health club membership.

We would need a minimum of 10 people sponsors to ‘buy-in’ at $200/year. Ideally there would be more. These sponsors would be permitted to securely store their flying equipment in a room inside the hangar for the flying season.

For the occasional sometime flyers: Flying costs would be $50/day or $75 for the weekend. For kids, they would fly for free or some nominal sum. Bong Eagles membership would not be required.

Money collected over $2000 would be used for cleaning/tables/chairs/helium/carbon pole/rainy day fund.

We’d set up insurance for the weekends and record trials for them as well. Should we have contests? Sponsors/members would need to decide.

Note that part of the proposal which the Village of Rantoul was interested in is the component to encourage kids to learn about indoor model flying. I am willing to help laser cut kits for giveaways for the cost of the balsa/parts. We would need people to volunteer to help teach kids to build/trim/fly.

Finally, as mentioned earlier, this is a facility which has been underutilized for 10 years and will require our elbow grease to make it ready for flying. The more hands who can give a hand, the better. This is part of developing a new site that we will use for years to come.

I will say that I haven’t explored a whole lot around the village itself. There are several motels within Rantoul and numerous hotels of various price ranges in Urbana within 20 minutes’ drive. There are also a few local campgrounds. There are various local restaurants and a couple of chains right in Rantoul.

If you are interested in possibly becoming a sponsor, please contact me using the form below or directly at propblocks@gmail.com

Rantoul Indoor site committee (of one)